Cities and urban environments will see some of the greatest benefits of the electric vehicle revolution. As combustion engines are replaced with electric drivetrains, exhaust emissions will drop dramatically, air will become cleaner and safer, streets will become quieter and calmer.

Battery-powered electric vehicles are clearly key to this future – the technology is widely acknowledged to carry the largest potential reduction in greenhouse gas emissions, with life-cycle emissions of a vehicle using electricity generated from renewable sources up to 90% lower than an equivalent internal combustion engine vehicle according to the IEA.

While electric passenger vehicles provide increasingly common examples of this technology in motion, this isn’t the only sector where battery technology is going to make a difference.

Municipal vehicles and public transport are in many cases well suited to electric propulsion by battery-powered drivetrains too; particular so when vehicles are operating with frequent stops along highly predictable routes since these circumstances are ideal for battery charging.

With battery performance steadily improving, system costs reducing and increasingly widespread regulation pushing for clean transportation, the switch to batteries is becoming the favored direction for most sectors of road transportation.

Transport sectors have failed to see emissions reductions as have been evident in other sectors over recent years, and road transport emissions are in fact increasing.

The European Environment Agency reported that having grown since 2014, road transport in the EU in 2018 accounted for 82% of the transport GHG emissions and one fifth of the EU’s total GHG emissions.

Electrifying buses with batteries – provided they are powered with clean electricity – would make a great difference. The most widely-used form of public transport in the EU, buses account for a little over half of all public transport journeys and 8% of all passenger land-based transport according to the European Automobile Manufacturers Association.

The emergence of battery-powered electric buses, or e-buses, is a relatively recent development, but with it an outlook comes into focus which paints a bright picture of how public transportation of tomorrow is likely to look. 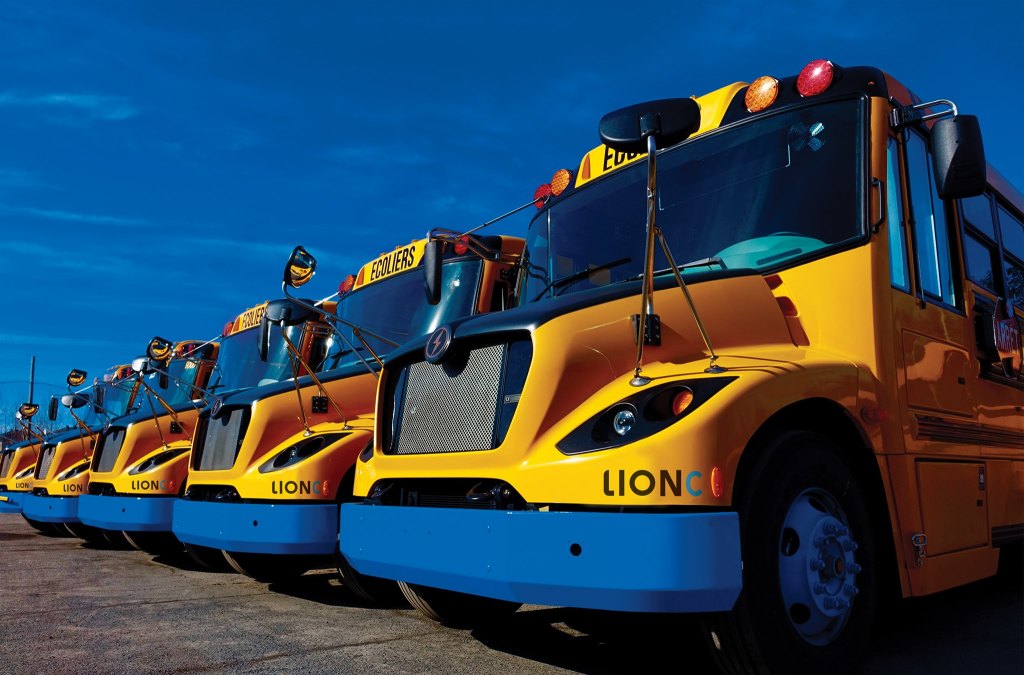 Electric buses from Lion Electric. Reducing pollution and emissions around children using school buses is an obvious benefit and something adding weight to arguments in favor of the switch to electric. Image via Lion Electric.

Optimism for e-buses becoming a major branch of public transport is reflected in the number of mainstream bus manufacturers which have adopted the technology, including Scania, BYD, Solaris, Irizar Group, Volvo, Mercedes, and VDL Bus & Coach.

By the end of 2018, these and other manufacturers had supported deployment of some 460,000 e-buses around the world (BloombergNEF).

It’s progress, especially considering the number grew by over 100,000 from end of 2017. And the impact of this according to a BloombergNEF report, is that by the end of 2019 some 270,000 daily barrels of diesel demand will have been displaced by e-buses.

Nevertheless, it’s clear that regions are embracing this new technology at varying speeds. China alone, for instance, operates some 421,000 of those e-buses, while the U.S. and Europe both operate fleets numbering only into the low hundreds. 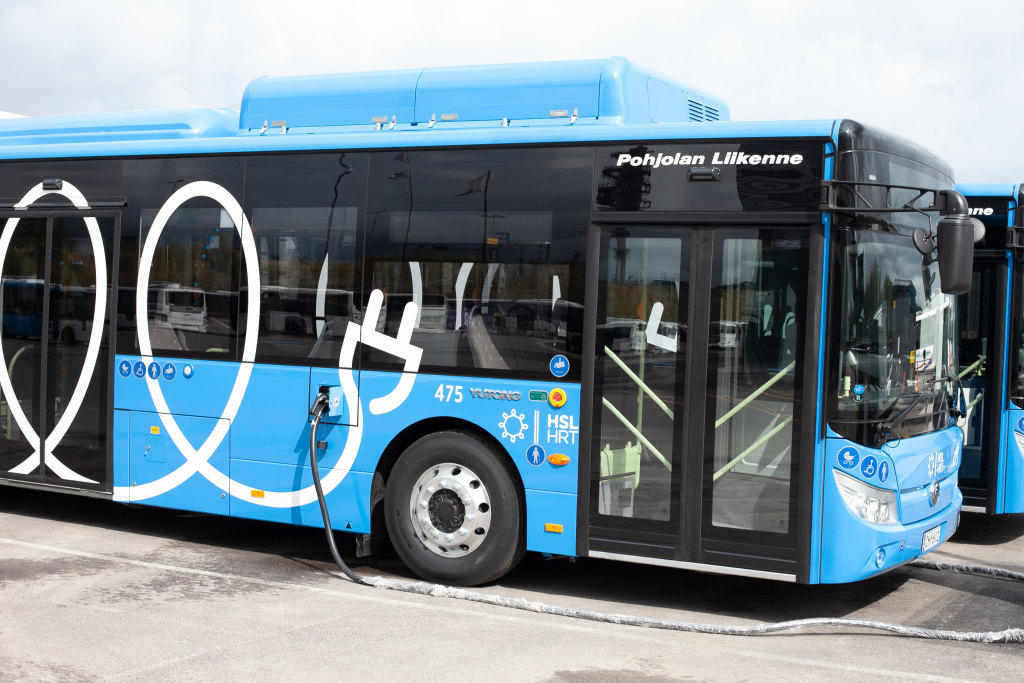 A fleet of thirty e-Buses arrive in Finland in August 2019.

While wide-scale adoption of e-buses outside of China is evidently in its earliest of days, encouraging trends are emerging.

Looking forward, BloombergNEF’s Electric Vehicle Outlook 2019 reports e-buses are to occupy a remarkable 81% of annual municipal bus sales by 2040. Interestingly, that’s a share higher than the equivalent number for passenger vehicles, which BloombergNEF put at 57%. 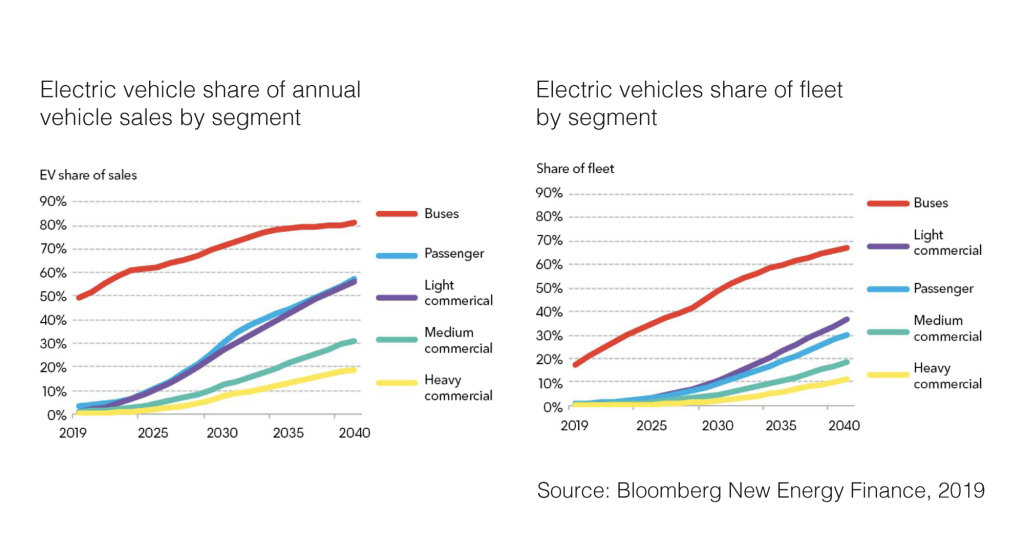 Key to the adoption of e-buses is that these vehicles are increasingly compelling alternates to conventional buses. Gains in this sense include e-buses being simultaneously more technically capable and therefore a valid alternate in a practical sense, as well as more financially viable to operate.

Earlier this year, Chinese manufacturer BYD – which has delivered over 50,000 e-buses and electric coaches – launched the world’s longest fully electric bus. At 27m long, the K12A can carry 250 people up to a maximum speed of 70 km/h and on a single charge can travel close to 300 km, which BYD suggest is around an average day’s operations.

A reminder of the benefits of this kind of technology, BYD have stated that a single K12A e-bus saves the equivalent of 80 tons of CO2 emissions per year and 360,000 liters of fuel throughout its lifecycle.

Alongside contributing to cleaner, quieter streets, e-buses in many places are enabling reduced costs of operation due the lower cost per kilometer for running on electricity compared to diesel fuel.

Because of this, while battery costs can mean that e-buses carry a higher upfront cost compared to conventional combustion engine buses at the present time, ultimately these costs can be recovered through lifetime savings. 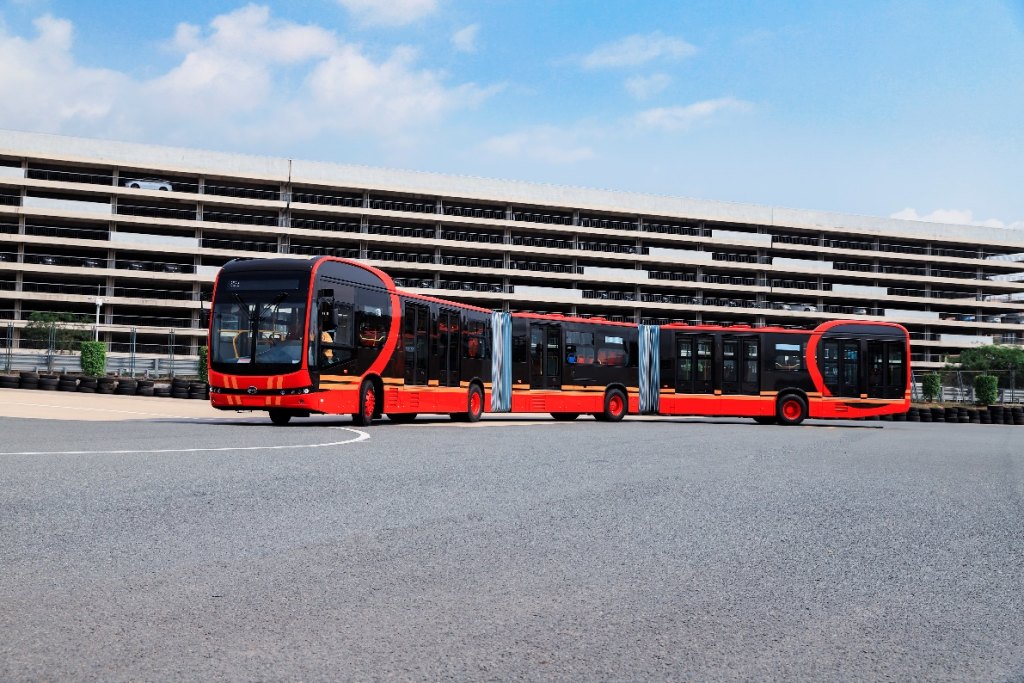 As the principal determining factor for performance, battery technology has a great role to play in success of electric passenger vehicles and e-buses alike. On this front, improved battery performance and reduced costs can be counted on to continue to both extend the driving range of e-buses and reduce upfront costs.

Successful deployment of e-buses, however, relies on more than the vehicles themselves. Lack of charging infrastructure and power constraints in the power grid can limit the practical workings and overall success of e-buses. Going forward, both these aspects of charging need to be considered by various stakeholders, not least municipal actors, automobile manufacturers, and electricity network operators.

Currently, we see several approaches to charging being explored, with two main charging strategies being overnight charging (typically utilizing charging stations at depots) and charging through the day (opportunity charging). Both strategies can be used with the three leading hardware options of plug-in, pantograph, and induction. Each have their merits, and it remains to be seen if the industry might converge on just one, or if multiple solutions will continue to be utilized.

As for handling the new loads on electricity grids resulting from charging fleets of e-buses (and EVs for that matter), solutions include smart traffic planning to enable frequent charging and energy storage systems to enable peak shaving of the power demands. 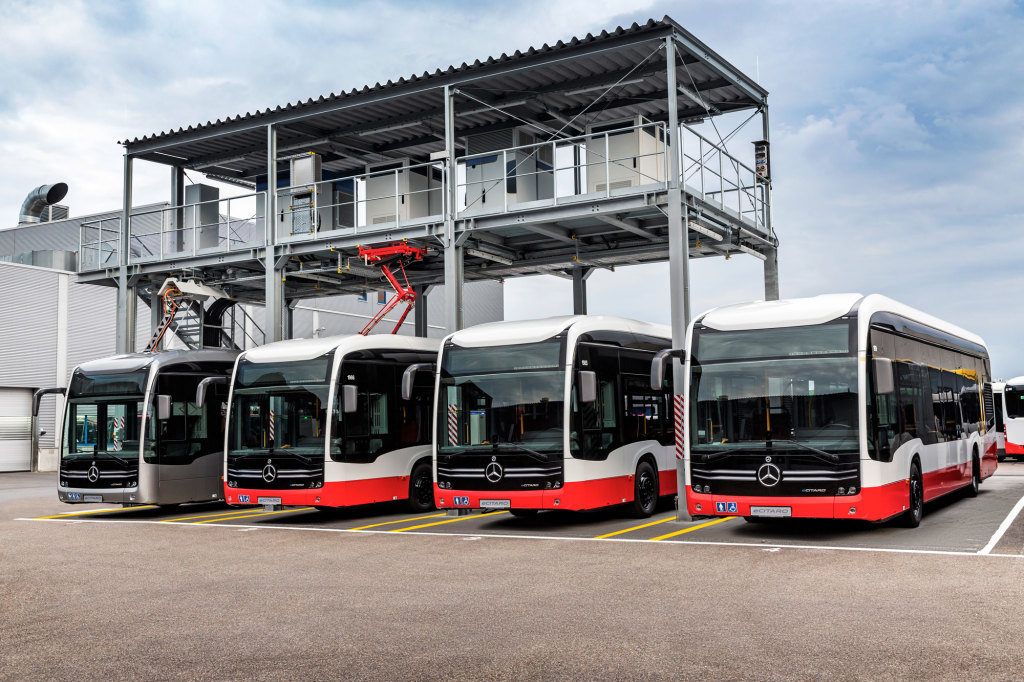 Flexible and modular infrastructure in Mannheim, Germany, for e-bus charging via plug-in cable, pantograph and charging rail from Daimler. Image via Daimler AG.

With some 745,500 buses in circulation on European roads today, and less than 10% of the fleet typically renewed each year as buses reach the end of their 8 to 10 year lifecycle, it will be some time before all buses are emission-free (ACEA).

Still, the change coming in even the next few years with e-buses will be noticeable, even if it’s silent.

What’s more, the speed of transition might yet be quickened as governments adopt stronger targets to accelerate clean public transportation.

Take the Netherlands for example. One of the most aggressive markets for electrification in Europe, the nation has mandated that 100% of new public transport buses by 2025 must be zero emissions, and that the entire fleet must be emission free by 2030.